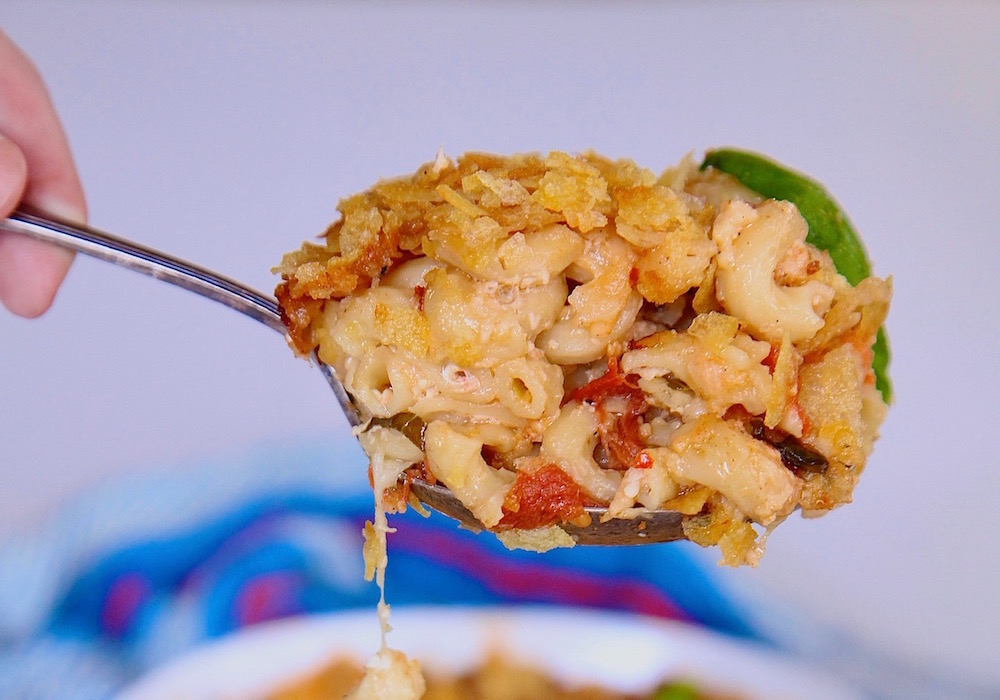 Potato Chip Mac and Cheese is the recipe my friends have been requesting since before I even started my website. This is the one I turn to when I wanna overindulge.  It’s holiday table worthy and extraordinary for an ‘any-day’ food hug. This recipe has a way of making you feel like you just chatted with your oldest friend. I pull out of my hat when I’m feeling a need for pure comfort or a bowl of cheesy happiness that words just can’t pinpoint…..  I’d much rather let my potato chip mac and cheese say it for me, and it does.

END_OF_DOCUMENT_TOKEN_TO_BE_REPLACED 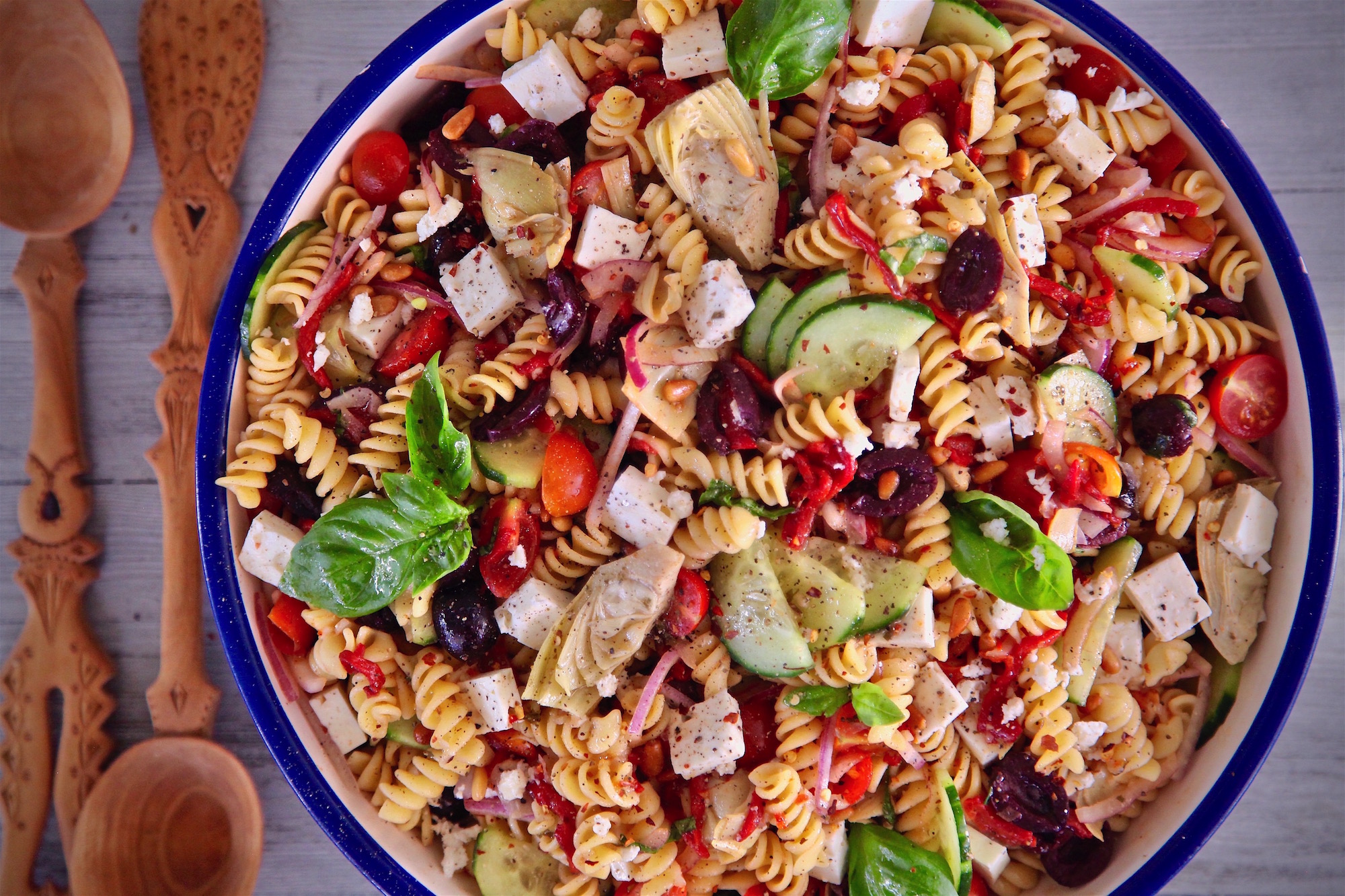 Spring has SPRUNG! It’s time to usher in the warmer weather with this refreshing Mediterranean Rotini Pasta Salad. I seriously dread having it in the house because I can’t stop eating it till it’s gone. On a the bright side it’s easy to make, and have on hand to accompany a main dish or partner up with a leafy green for a duo salad night.

END_OF_DOCUMENT_TOKEN_TO_BE_REPLACED 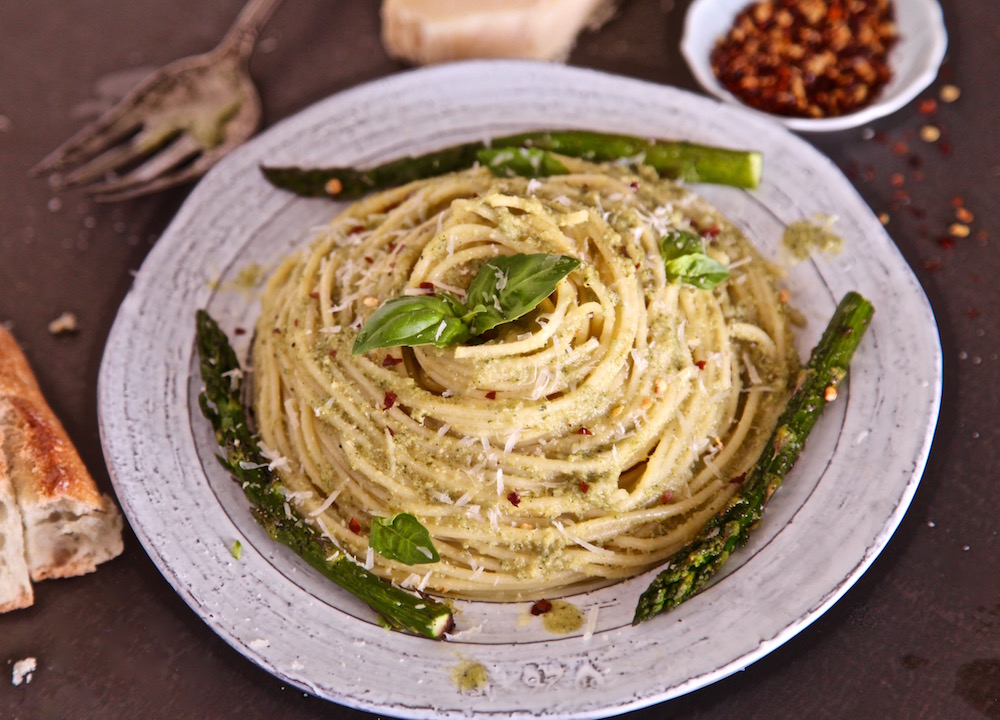 This past summer my family and I traveled all throughout Italy. It had been a destination on my bucket list for many moons, not only for the historical sites but for the delicious food. Italian cuisine sits high amongst my favorites and I couldn’t wait to dig into a plate of authentic pasta. I learned from my Italian excursion that the most simple sauce is always best. END_OF_DOCUMENT_TOKEN_TO_BE_REPLACED 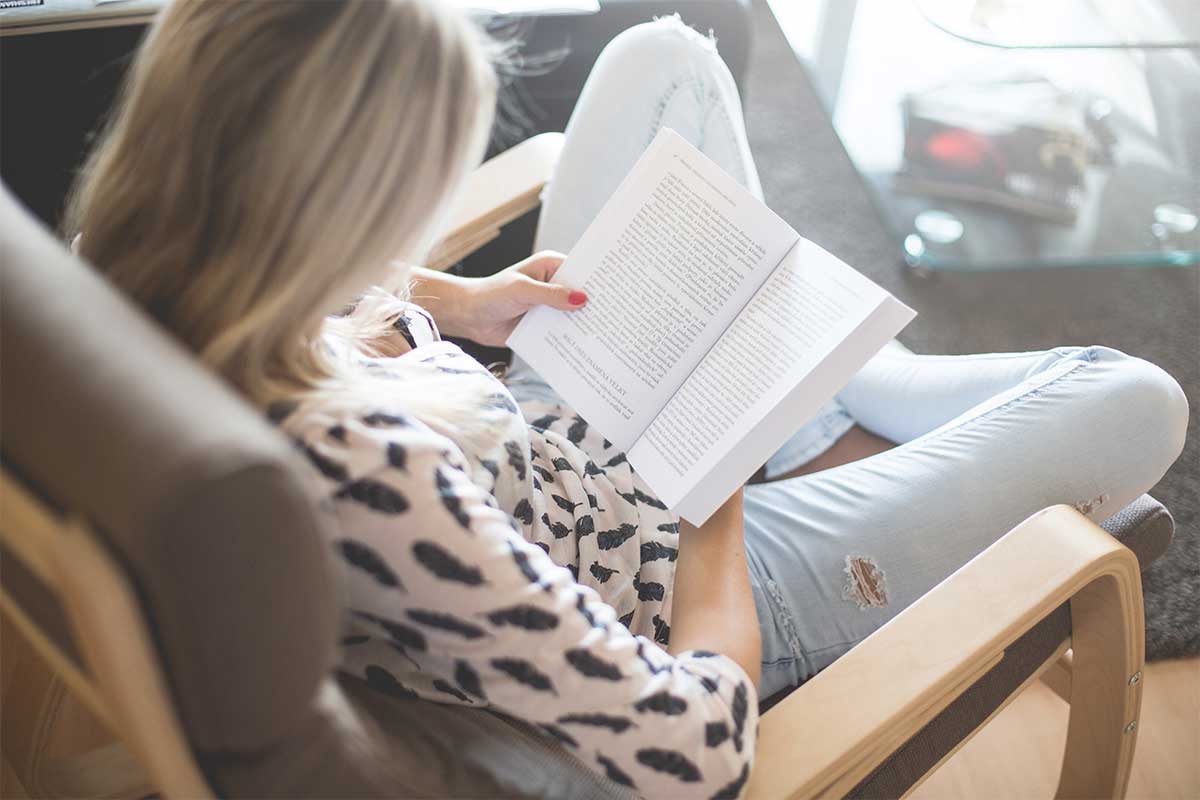 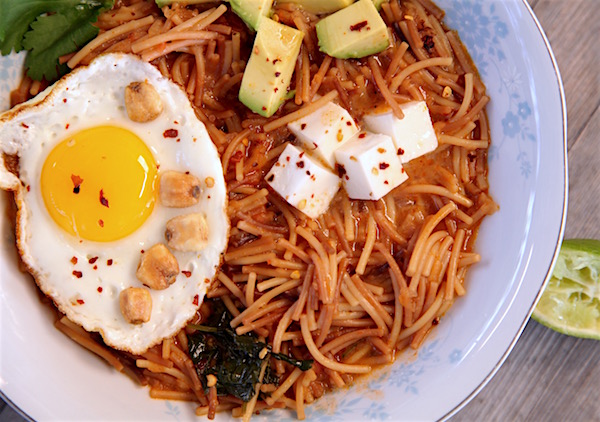 Let’s talk about Fideo… My Mom and I are fans of a nice bowl of spicy fideo. We pride ourselves on who makes it better. We try and impress each other with fully loaded versions of our favorite sopa de fideo. Sometimes I make it super soupy and END_OF_DOCUMENT_TOKEN_TO_BE_REPLACED 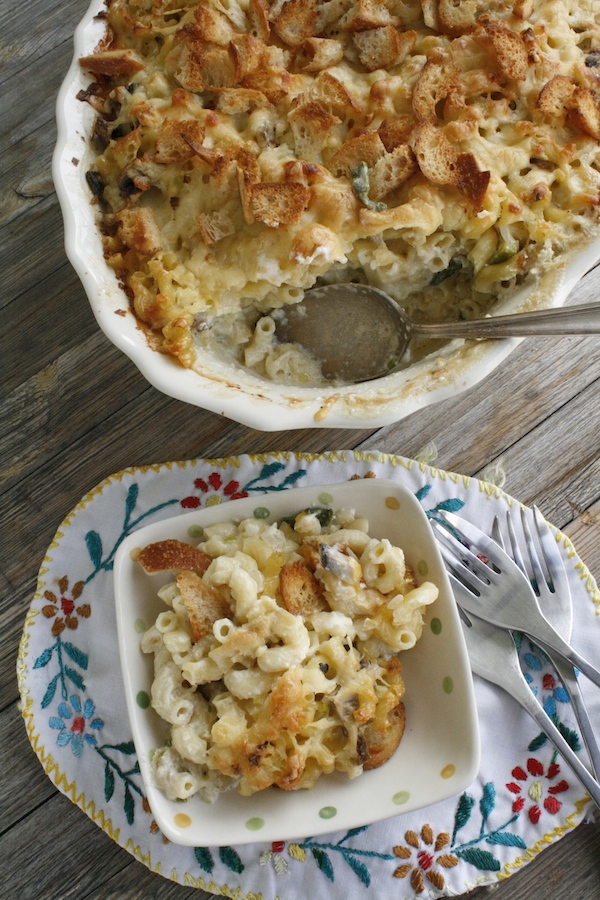 Ay! My Mom…. I can’t take her anywhere. It was 15 years ago, I was navigating my way through the food scene here in Los Angeles. Trying out all the newest hot spots with the most promising chefs hidden behind closed cooking quarters. Now I couldn’t go out to eat by myself, so a lot of times I would drag my best companion along with me, my Mom. Even though she would kick and scream the END_OF_DOCUMENT_TOKEN_TO_BE_REPLACED 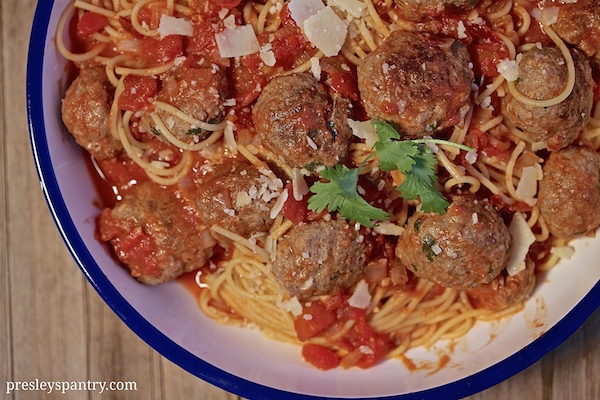 This is a sponsored post on behalf of Barilla, however, my opinions are entirely my own and I have not been paid to publish positive sentiments towards Barilla or their products.

You know that feeling you get when you’re eating something that encompasses your tastes from your youth and combines them with your adult palate… That’s how I feel about my chipotle albondigas and spaghetti. It’s just so good, that the entire table falls silent when I serve it. I swear I’m not sounding my own siren, I’m just giving you the facts. It’s the albondigas in spicy chipotle sauce that remind me of my days as a teenager eating with my Grandpa, and the thick spaghetti cooked al dente that plays to my adult happiness.

A few weeks ago I flew to the Barilla headquarters in Chicago and was lucky enough to cook in their kitchen. I felt like Charlie in Willy Wonka’s chocolate factory. I was given carte blanche to anything in the fridge and pantry, and told I had 40 minutes to make something…. and that something had to BE GOOD!  When I heard that I had an itsy-bitsy anxiety attack. I quickly scanned the fridge and found ground beef and ground pork… I immediately thought of my Grandpa’s albondigas and how he mixes the two meats. I went to the pantry and sure enough they had some chipotle peppers in adobo sauce on hand, and I then knew exactly what I was making, suddenly I felt all the little ghost butterflies exiting my stomach. I ran over to the area where the wall of Barilla pasta resides with confidence and looked carefully over the many varieties before I settled on a thick spaghetti. I just love that Barilla delivers a trusted product of superior quality, providing me with pasta that does not stick or clump and a flavor that compliments my traditional Hispanic ingredients. Here’s my recipe so you can make it at home. I made it for friends this past weekend, and the table was silent. 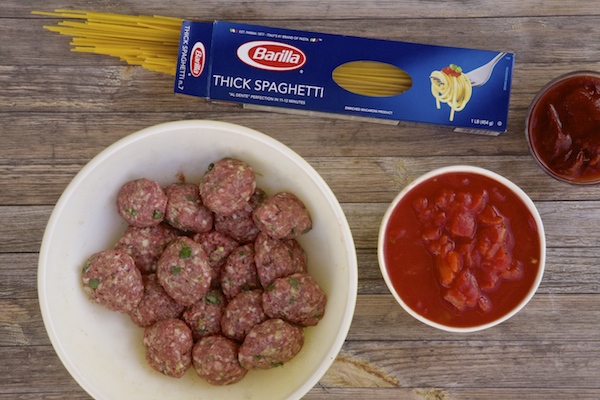 This is a sponsored post on behalf of Barilla, however, my opinions are entirely my own and I have not been paid to publish positive sentiments towards Barilla or their products. 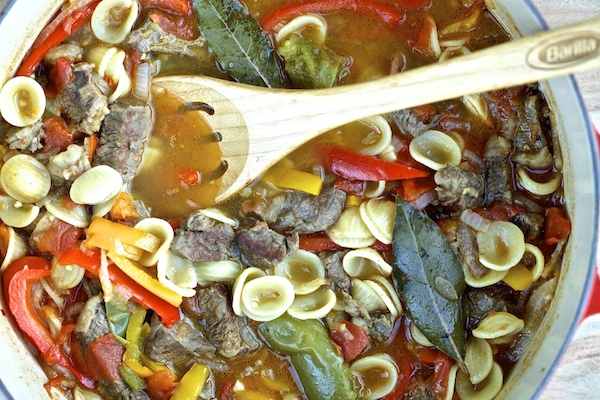 I always knew when we were going to have steak picado in my house. My grandfather who was a butcher for most of his working life would bring home a sirloin steak and cut it into cubes. This ritual was usually followed with him chopping up bell peppers, tomatoes, onions, and jalapeños. A little drizzle of oil would carefully get circled into the hot pan and then a sizzle of raw meat quickly followed as it touched the scorching cast iron pan. I would unfailingly offer my services, and he would respond by telling me ” just sit down and keep me company, or you can wash the dishes as I cook.” I would do a little of both, as I looked over my shoulder trying to learn the tricks of the trade. He was such a creature of habit with the routine sprinkle of spices on the meat… a pinch of cumin, oregano, and salt.  While the meat simmered he would start on the rest of the meal and make a starch as an accompaniment, usually a pan of refried beans. At the time I wasn’t a fan of beans, so considering that I was his co-pilot (or as my aunts and uncles referred to me: spoiled granddaughter ) he would make me a small side of fideo, or conchas, or estrellas to eat with my soon to be made steak picado. That’s the way I came to love it as a young kid, and still crave the pasta companion to this day with my steak picado. A few years ago, I decided instead of making the pasta on the side, why not add it directly into the steak picado? This would allow for the pasta to soak up all the flavor of the liquid and I would be able to satisfy the best of both worlds in one pot. Fortunately for me Barilla has a wide selection of high quality pastas to choose from, sometimes I may add a handful of cut spaghetti, or stelline (little stars), or shells, or elbows, or collezione. They all work and they all have that special taste that takes me right back to being a little girl eating steak picado and pasta with my Grandpa. 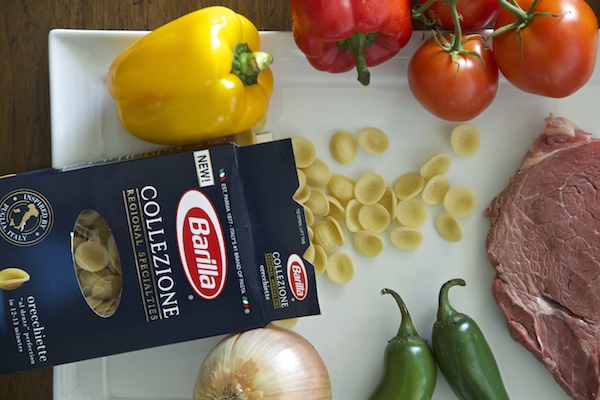 Follow my pasta dishes with these hashtags:  #PastaATúEstilo and #ItsPossibleWithBarilla

Disclosure: This is a sponsored post on behalf of Barilla, however,  my opinions are entirely my own, and I have not been paid to publish positive sentiments towards Barilla or their products.